The fixtures for the 2022 season have been released and can be found in detail across the website.

With recent speculation regarding the â€˜Hampshire Slamâ€™, we have decided to call an EGM for all clubs to have an input on how we should proceed with the future of the League.

We will be only too happy to share with you what we know about the competition and discuss the various options open to us. Following your input, we would then look to put together a number of options that can be presented and voted on at an AGM in January 2022.

Please can one representative from each team attend the EGM on Tuesday 12th October at Old Tauntonians & Romsey Cricket Club, with a 19:30 start.

The 2021 Cricket Playing Survey is live, and the ECB want you to have your say.

The survey is the ECB's number one opportunity to listen to the views of players. By sharing with them what you think, they'll gain valuable feedback to ensure the voices of players and volunteers continue to be heard, and the game of cricket keeps evolving.

To thank you for taking part, you will be entered into a prize draw to win one of five Â£100 Amazon gift vouchers.

It was a disappointingly fitting end to our league season last night, with most matches washed out by the rain once again.

But congratulations to our three division winners:

The semi final draws for the Cup and Plate are as follows:

Cup Semi Finals (to be played on Tuesday 20th July):

Plate Semi Finals (to be played on Tuesday 20th July):

We have managed to secure two venues for the Finals in August.

Thank you to Ampfield & North Baddesley, who will host the Plate final on Tuesday 3rd August.

And thank you also to Redlynch & Hale, who will host the Cup final on Thursday 5th August.

Good luck to all those teams still battling it out for a place in the final of both competitions.

The draws for the next rounds of the knockout competitions have been drawn.

Michelmersh and Timsbury will play Lyndhurst & Ashurst in the Plate preliminary round, provisionally scheduled for Thursday 17th June.

The quarter final draws for the Cup and Plate are as follows:

Cup Quarter Finals (to be played on 29th June):

Plate Quarter Finals (to be played on 29th June):

In light of Wellow & Plaitfordâ€™s announcement that they will have to drop a team from this yearâ€™s Border League competition, the committee has decided that this will be the clubs â€˜Bâ€™ team. Division One will carry on the season with 6 teams and Division Two with 5 teams; and all Wellow & Plaitford B fixtures will become bye weeks.

Calmore Sports, who were due to face Wellow & Plaitford B in the Cup competition, will now have a bye and go through to the next round of the competition.

The league received the unfortunate news yesterday that Totton & Eling are unable to field their first team this season so the League has now become 18 teams.

We have taken the action of suspending the relegation from the 2019 season, meaning Trojans will remain in the Premier Division and Lyndhurst & Ashurst will remain in Division One. This way will see the least disruption of the fixtures however the fixtures for Division Two have had to be rewritten as there will now be no bye weeks. We have also had to redraw the cup preliminary round as Totton & Eling A were scheduled to be involved in this.

Please find the latest fixtures across the relevant pages of the website.

The ECB has released its anticipated roadmap for the return of cricket in England from 29 March, as well as guidance for Wales. 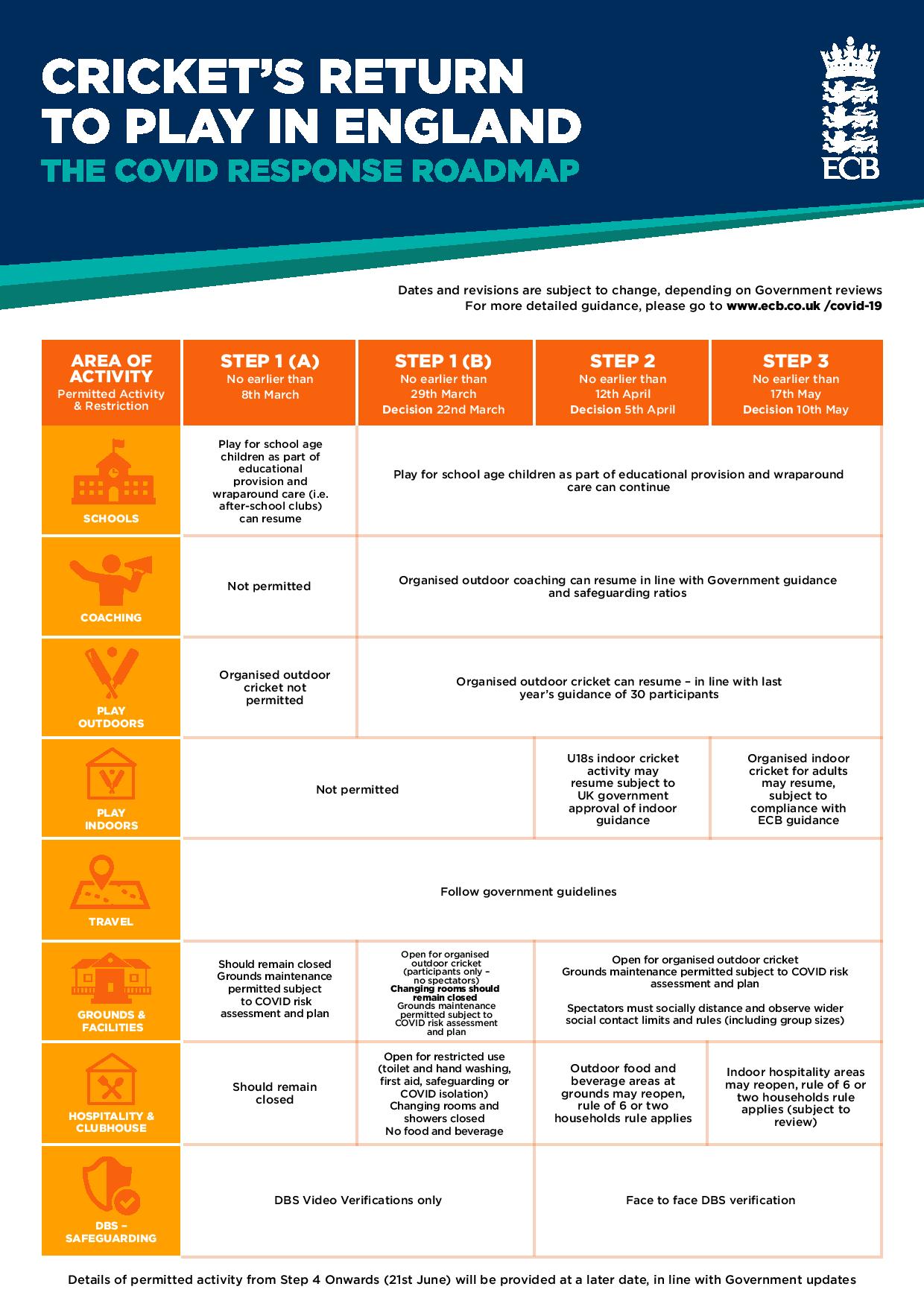 The full announcement can be found at https://www.ecb.co.uk/news/2072091/crickets-return-to-play-roadmap-for-england-and-guidance-for-wales.

The fixtures for the 2021 season have been released and can be found in detail across the website.

Happy new year to you all, I hope you had a good Christmas and are as healthy as ever. Just a quick note to say we are still here and planning for the upcoming 2021 Taurus Border League season should government restrictions allow it. If you know of any teams who wish to join the league, please get in touch urgently.

Our plan is to use the 2020 season as a base for 2021 and subscriptions will be rolled forward. If you have any concerns about this please get in touch with the committee.

Bookings are now being taken for next monthâ€™s club welfare officer courses being run by the Hampshire Cricket Board. The cost is Â£30 per course (card payments only) with the last day to book being Sunday 29th February.

Bookings can be made via www.ageasbowl.com/cricket/cricket-board/courses/safeguarding.

The following dates/venues are available:

If you require any further information, contact Simon Jones (Simon.Jones@ageasbowl.com) at the Hampshire Cricket Board.

The fixtures for the 2020 season have been released and can be found in detail across the website.

As promised at last night's AGM, the usual contact details requested pre-season can now be submitted via the website.

All clubs are required to attend. The agenda for the meeting can be found here.

After several weather related delays, the draw for the semi finals of the Cup and Plate have been drawn. They are as follows:

These fixtures are scheduled to be played on Tuesday 2nd July but if not, then before the end of July when the finals will be held.

The fixtures for the 2019 season have been released and can be found across the website.

The final team to play in Division Two will be confirmed at the earliest opportunity and the draws for the knockout competitions will be drawn closer to the opening week of the season.

As promised at last night's AGM, the usual contact details requested pre-season can now be submitted via the website.

The agenda for the meeting can be found here.

Photos from the Cup and Plate finals are now available in the gallery.

Congratulations to Paultons and East Tytherley who won the Cup and Plate finals respectively.

Langley Manor have been confirmed as the hosts of this seasons Cup final to take place on Tuesday 31st July.

Thanks to Roy Honeybone for taking photos of yesterdays finals day. A selection from the day can be found below; with all the photos available in the Gallery.

Congratulations to Calmore Sports and Paultons, who were crowned 2017 Plate and Cup champions respectively.

Due to their ground still being unfit for play due to the April rain, Langley Manor have reluctantly agreed to a change of venue for next weeks Finals Day. The matches shall now be at Lyndhurst & Ashurst (Boltons Bench) with the start times for both matches remaining the same.

The rainy weather has already claimed six of the opening fixtures. They are Bramshaw A vs OT's & Romsey, Cadnam vs Paultons, East Tytherley vs Calmore Sports, Bramshaw B vs Totton & Eling A, Ampfield & North Baddesley vs Mottisfont and Langley Manor vs Whiteparish.

The fixtures for the upcoming season, both league and opening rounds of the knockout competitions, have been released and can be found on the relevant pages on the website.

The Plate final will be contested between Calmore Sports and Cadnam on Thursday 27th July. Play will start at 18:15 with the match being held at Mottisfont CC.

Ampfield & North Baddesley are having a new pavilion built during the close season, progress of which we will attempt to show throughout the various stages of building.

In conjunction with the ECB, Play Cricket are releasing a free scoring app in March.

A new result sheet has been released for the 2017 season. It can be downloaded here.

Congratulations to Trojans who have won the Cup after victory over Calmore Sports A.

The Plate & Cup finals will be played at Michelmersh & Timsbury and Totton & Eling on 28th July and 2nd August respectively.

With the completion of several outstanding cup and plate matches completed last night, the situation is currently as follows:

Please keep checking the website for the latest information.

It has been brought to my attention that some teams are still sending result sheets to old e-mail addresses. From this season onwards, result sheets should only be sent to results.secretary@bordercricketleague.co.uk.

With the season opening fixtures upon us, please find the Results Sheet here. Please make sure all the necessary information is filled in, especially players name which need to be a minimum of first initial and full last name.

Upon completion, please send to results.secretary@bordercricketleague.co.uk at the earliest opportunity.

The draws for the preliminary and first rounds of the Cup have been drawn. More info can be found on the various pages of the website.

The league fixtures for the upcoming season have been released and can be found on the relevant pages on the website. The draws for the opening rounds of the Cup and Plate will follow closer to the beginning of the season.

We are delighted to announce that Langley Manor have returned to the Border Cricket League for the 2016 season. They shall take the place of Old Netley & Highfield who have unfortunately (but understandably) withdrawn from the competition.